Mallorca
Words By Loren Hettinger
Photos By Ed Greivel
May 2019

I had been regaled for a few years by teammates about Mallorca and epic riding—somewhat
like riding the hill country around Fredericksburg, TX, but magnified by . . . 10 . . . 100? Something
extraordinary. So, here’s my perspective:

roads sometimes narrow, usually shared by a multitude of cyclists and often by drivers who
understand cycling or know that to share the road is really not rocket science (except for tour buses
trying to navigate a switchback and need all the road they can get)? And what if these roads coursed
through aleppo pine, juniper (enebro), carob trees, tamarisk, and wild olive forests and scrub with the
occasional large, sword-leaved agave? And then wound their way up and down daunting cols
(passes), through sun-drenched idyllic villages on narrow streets? Would you go?

That question
deserves the old-craggy-cowboy response of, “Does a bear poop in the woods?” And then, overlay all
this with a luxurious hotel (the Monnaber Nou Eco near Campanet, Mallorca), featuring a pool of
turquoise water and a jacuzzi (which we never had or took time to use) and breakfasts of cappuccino,
assorted juices, fresh fruit, carpaccio, muesli, scrambled eggs, sausages, bacon, assorted pastries and
breads, and of course fresh olives. My usual breakfast is skimpy in comparison and I thought during
the first morning that this new load of groceries would be like having swallowed a bowling ball or by
the end of the week my physique would be even more Humpty Dumpty-like than before; but the 4 to
5-hour-plus rides needed the calories and then some. Anyway, I think most cyclists on being
presented with this opportunity would be on a plane as soon as they could pack enough jerseys and
shorts to support six days of riding.

Trek Travel arranged the tour and had bikes set-up for each of our road-bike specifications;

these with Di2 shifting, disc brakes, and a Garmin with maps of each day’s route. Our group of thirty-
three (initially) was quite diverse, being comprised of cyclists from California, Alabama, New York,

Canada (Vancouver and Ottawa), Switzerland, and of course, our Colorado contingent. Many like
ourselves from the Schwab Cycles Racing Team were ex- or current racers, although the majority
were veterans of long-distance tours. We had four tour guides who alternated with three riding
among the group and one driving a van for support, including setting-up a lunch along the route. All
three guides riding among us seemed inordinately fast; maybe a result of youth, innate athletic
ability, and riding these mountain roads four or five days each week. The guides exemplified the
international character of the riders, being from England, Mexico by way of Bolivia and Florida,
Barcelona, and of all places, Durango, CO.

In viewing the ride schedule and routes, I had contemplated that I might graduate to some of the
long options toward the end of the week--especially in thinking how awesome I would be with the
“nearly pure” oxygen at sea level. However, after the sa Calobra ride of switchback after
switchback and 6500 feet of climbing, the vision of myself and reality became more aligned
toward survival. Yet, the sa Calobra route was one of my favorites. But I really liked the Deia route
too with three climbs and a descent into and through the idyllic village. The allure was enhanced
by a quaint bicycle-accessories shop and a helpful, smiling clerk who assisted us as we pulled
jerseys over the ones we already wore—just to see if the new ones with a kit-coordinated color
and map of Mallorca would add to our stature as lithe, svelte cyclists or conversely, and more
likely, enhance our mid-line bulges.

Yet the Formentor ride, which culminated in a series of sharp switchbacks to a lighthouse on a
point extending into the Mediterranean, was alluring too. This ride became increasingly interesting as our
reverie in the view of the white stone-constructed lighthouse and blue water was broken by a gathering
cloudbank. Its gray, then dark blue (darker than the sapphire Mediterranean) and increasingly black
overtones spurred us to throw-down any remains of espresso, hustle to our bikes and work our way
through all the cars in the parking lot to the start of the return climb. I knew we had left it too long, that
the storm was in a hurry to make landfall. My weather predicting ability seemed on point (well, it was
obvious); several large flashes and immediate claps of thunder vibrated the landscape. We were riding
close to a rock wall on one side and tall pine trees on the other, and a thought of being welded onto the
saddle was no comfort. Then hail started in earnest (another reason to wear a helmet), followed by
stinging rain. I stopped with four others along the wall to belatedly pull on rain jackets. As we continued to
ride through the wet from above and the wheel splash from below, the rain abated, but the unpredictable
wind increased until it was a challenge to figure whether to angle toward the centerline or shoulder or
perhaps feather the rear brake and keep the power on--which seemed to increase stability. Although we
were variously wet, depending on the proficiency of rain jackets, the rest of the ride—maybe 20 miles—
was fine although the wind continued. However, a hot shower at the hotel and a beer on the veranda put
the storm into perspective—just another epic day on the bike. 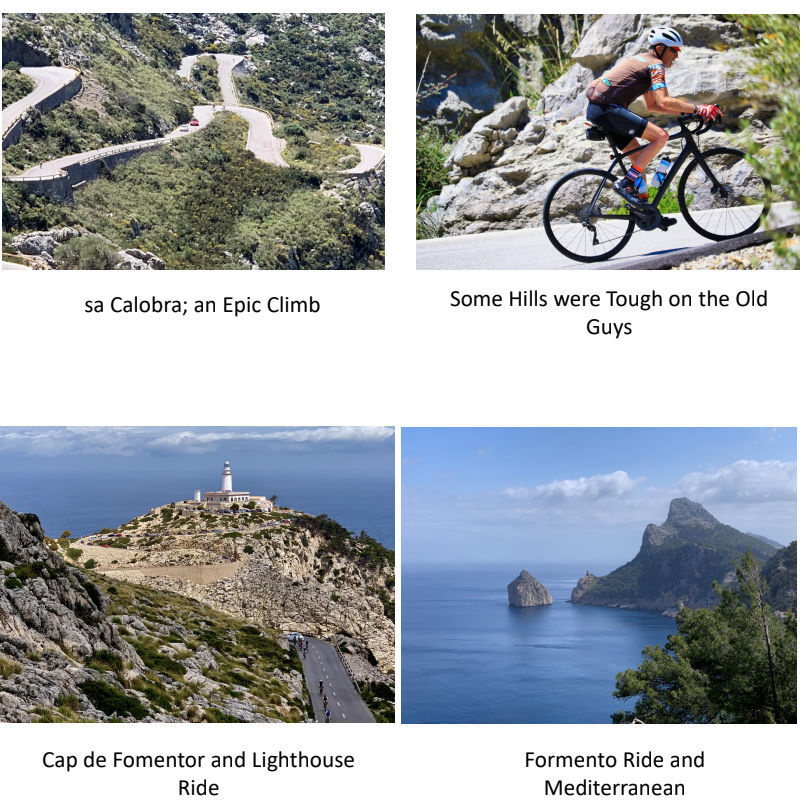 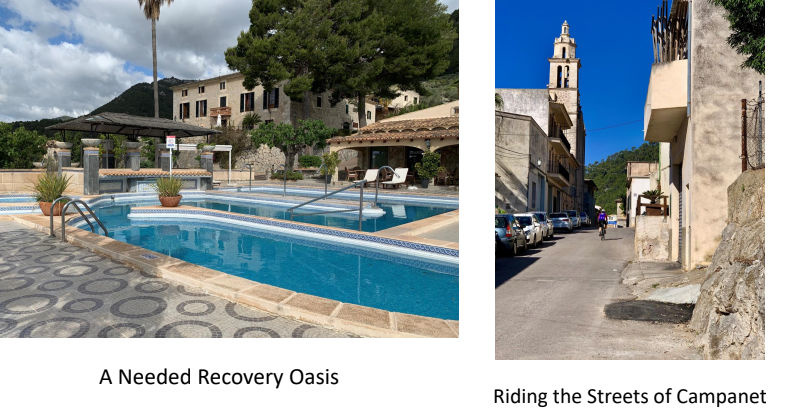